US Airways, Nickels and Dimes

As I returned from Columbus, Oh. I am absolutely frustrated beyond words.

I read in the USA Today last week that US Airways lost $567 Million Dollars in the first quarter of 2008. First of all, I find this hard to believe, because every flight I have been on these last four months have been full. The first few months of the year, I received incredible customer service. Recently, I have felt betrayed and raped by US Air"WORST"

2) I get to the airport, and they charged me $200 to fly her because she was not 15 years old yet. Now most major air carriers UM (unaccompanied minors) age limit is 14 or 13; not US Air"WORST" their's is 15, and low and behold, they just changed their UM policy to charge customers $100 each way of travel. Seriously?

3) As of July 1st, they are charging $15 for the first bag and $25 for the second bag checked. Now this isn't a big deal to me, however, the ripples in the water are. For example, since there is a fee to check a bag, travelers are now NOT checking bags, and carrying on. This does a couple of things, one; it overloads the overhead bin space, so the last few travelers are going to be forced to pay either way. Two, now the aisles are more stuffed than before, causing flight delays and all other kinds of abnormalities. Seriously?

4) To top it all off, US Air "WORST" is now going to charge each traveler $2.00 to receive a soft drink, water or coffee. In addition, they are increasing their cost of alcoholic beverages to $7.00 per drink. Seriously?

Now, the big problem! I have been traveling with US Air "WORST" for the last 14 years. Even when they were America West. I have been trapped at an airport with America West Employees during the blizzard of 2006 in Denver. I have had flights canceled. None of which has caused me as much frustration as I feel now. What Knucklehead thought of the brilliant idea of charging $2.00 for each soft drink? This is the person that does not know the strength of long term investing.

Let me explain. These little short fixes for US Air"WORST" will only cause harm in the long run. Since I have been traveling, I have seen the likes of Southwest, United and Continental. I simply refuse to fly NorthWORST for customer service reasons. Organizations like Southwest really inspire me to travel with them for the long term. Southwest builds a relationship with their customers, to keep them coming back. US Air "WORST" is just in it for the money. 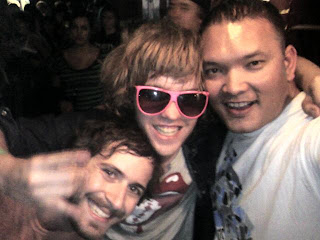 At the end of my last trip, which I was going to call Anaheim Chronicles II, I decided against it. On Friday when I returned to Phoenix, My trip was capped off with a concert with my daughter, her two friends and Ashlee my Niece.

We saw Powerspace, Ace Enders and a Million Different People and Danger Radio. Cute is What We Aim For was the title band who played at the end, but I went outside and talked with Ace Enders.

The week started off with a golf tournament in Aliso Viejo with my good friend Mike Medina and went through to be one of the hottest weeks in SoCal.

I commenced to play Eric in tennis on Tuesday and again on Thursday. I thinked I faired better on Tuesday because my serves were going in. Thursday, Eric smoked me in two sets. I think I just got too frustrated and got too mad to play correctly. Overall, it was a pretty active week for me.

Now for work, I just did Traffic Control training all week! I topped it off with a one hour presentation at an auditorium in Huntington Beach. It was a very good presentation. I had a bit of a challenge on Friday with some of the students. They were having difficulty picking up the math in the traffic control set up phase of the training class. To top it all off Marjorie brought lunch to class and it might have served as a bit of a distraction to the students. Oh well, we recovered and I got really good reviews.

To finish off the week, as I alluded to it earlier, I went to a concert on Friday. What a blast. Courtney was on the stage side of the bar and I was on the "Adult" side of the bar. It seemed to be the right thing to do because I did not want to get involved with the teenage wasteland of stagedome. The kids were crazy in the middle of the dance floor. So, I just hung out at the bar. Come to find out, so did all of the band members from each band. What a kick! I hung out with Max and Kevin mostly from Powerspace. And then Alec and the keyboardist from Danger Radio. Courtney was now looking at me going, ha! my dad is hanging out with the band members, what a cool dad! To top the night off, I saw Ace Enders, yet again. In March, Eric and I saw Ace in Anaheim at the House of Blues with Angels and Airwaves. This guy is great!
He was sick this night, but he signed my Volcom shirt and all was good.

I think to top it all off, as I was walking out the door, Courtney asked if I could get her Danger Radio bag signed and I said okay. Walked right up to the band and they signed it right away. These guys are really awesome! Thanks Powerspace Ace and Danger Radio for a great night and to cap it all off an overall great week!
Posted by Tim Page-Bottorff at 3:19 PM 1 comment:

As I leave Jacksonville, Fl. I just realized that I am going to be at the each end of Interstate 10. From Jacksonville to Los Angeles. ( I will be in L. A. next week)

This week served as one of the worst sleep weeks I have had. From working third shift at Honda to training first shift in Jacksonville. I was still stuck on midnight training and could not make an adjustment. I stayed up until 1-2am each morning in Florida. Now it is 4:30pm EST and I am on my way home, via a connection in Charlotte.

I am due to arrive in Phoenix 12:00pm EST. I think I will sleep on the Aeroplane!

Well, I suppose I can describe my time in Florida. First, I purposely avoided visiting with my cousin. After a disagreement between My Aunt and Mother, I just decided I could not handl the drama.

My two days in Fl were with IFF International Flavors and Fragrances. They manufacture chemicals that help flavorize things like doritos, chips, and odorize dryer sheets, and household deodorizers. What a plant! Many chemicals.

The students went through a Train The Trainer for Safestart and it was incredible. The Union is strong and not a big advocate for behavior based safety. The Steel Workers Union. Hmmmm it figures. 20 people, 20 excited reviews. GREAT! I think I was hitting a grand slam the entire time. I enjoyed. Loved the southern hospitality!!!!! It is 10 after on the 10th day, I digest, it is the end of 10......
Posted by Tim Page-Bottorff at 1:16 PM No comments:

After connecting in Las Vegas at 11:00 pm, I arrived in Columbus, Oh at 6:30am. The flight was rather long and it was very difficult for me to sleep. For those that know me, I usually fall asleep without hassle. Well not this time. My internal clock is really messed up today, I slept till 1:30pm today and feel overly tired. Oh well....

I am here for a reason and that is to implement Safestart for Honda of America. The groups I am teaching are for the second an third shifts. Which ends around 1:30am.

On Monday, I received a call from a good friend in Bismarck, North Dakota. He is the Safety Manager for the DOE Western Area Power Administration in North Dakota. His phone call was not good news. He told me on the phone that another real good friend and the Safestart Administrator had died in a car crash. The crash happened at work on July 1, 2008. He wasn't speeding, he wasn't out of control, he wasn't frustrated. Brian Morris was neither of those. However, he was driving in a large dust storm with low to zero visibility and he could not see the dump truck in front of him. Brian will be missed.

From the Red Eye flight to the information about Brian, it has been a tough week already and it is only Tuesday. I leave for Jacksonville, Fl on Wednesday, I think things will turn around....I hope.
Posted by Tim Page-Bottorff at 11:09 AM No comments:

The Wonderful People of the South Pacific

So My oldest is home from a 21 day trip to the southern islands of Fiji, New Zealand and Australia. She came home with the 2nd wind of an exhausted lion waiting for a kill. She had many stories and gifts from the visits to those islands.

I wiped away a tear when I saw her coming down the exit ramp from the security area at the airport.

The parallel here is that I went to the South Pacific too. I remember a trip in the Marine Corps when I went to Micronesia on and around the Equator. This trip was so self gratifying that I hope Courtney got to experience that culture as well. My trip earned a Humanitarian Service Medal. We (The Marines) went to Chuuk, Truck, Pulau, and several other little islands to recon their water wells, after most of their wells went dry in a long drought. We took sea water and desalinated it, my job was to inspect the water and test the pH and other contaminants.

The locals, when I went, were very cordial. I think Courtney, for the most part, witnessed high levels of civilization, however she did spend some time with locals in Fiji and the Maori in New Zealand. She did go to a museum in Australia and watched a Aborigone tribal dance. Metaphorically, Sheila said something to me that has stuck, The U.S. is the only country where you can be poor and fat at the same time.

These countries that Courtney and I visited did not have any evidence of that. Which should tell you something. Of course, I shall refrain.....but understand this, these people find a way to survive. The people here in the U.S. look for the next thing to complain about. For example, the price of gas, the cost of food, how far away your friends house is, what are you going to have for dinner what did George Bush do now.....etc, etc, etc. Quit complaining, make something happen. TAKE ACCOUNTABILITY
Posted by Tim Page-Bottorff at 6:23 PM No comments: