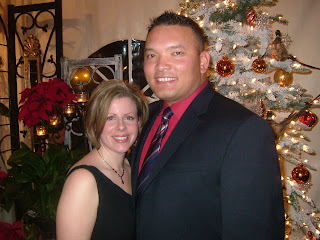 In case you might be wondering, I have not traveled for a week and am home for another week. I have decided to skip talking about traveling and talk about my wonderful wife who, I met 17 years ago August 31.
As I relax today; Sheila and I went on a long awaited date lastnight and we had a great time. We went to a restuarant/bar called Barcelonas in Scottsdale. We ate, drank and danced. But, neither of us figured out it was our 17 year meeting aniversary. You see, we met 17 years ago.....Here is the story:
There was this Maroon 1985 Ford Escort driving in circles on Camp Pendelton, California Marine Base. We happened to intercept the car. What's more, there were three ladies in the car. Funny thing was, you could not see the driver over the seat. But for me and my buddies, there were some chics in the car.....so.....lets.......follow......them! As we followed them, they get lost, we get frustrated, and we continue on. But now, they make a u-turn, and they start following us. 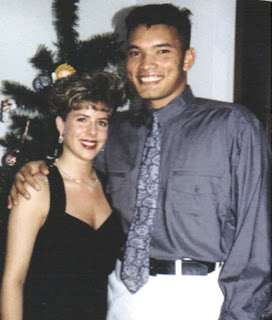 These three young women came up to me and my friends and asked us to sign them in. Civilians cannot get into the club unless they have an escort. Here is the irony, these three ladies were the ones in the Maroon Ford Escort. One of them was Sheila. My wife. We drank, we danced but we did not eat. Sheila had to get home with her sister and cousin. We invited them to Dennys but we got denied. I thought that would be the end of it. Sheila went to work the next day, and I hung out with my friends. I call Sheila that evening, and she thought my name was TOM???!!!?? So I corrected her. Of course, she didn't tell me this until 16-17 years later.
As you can see in this picture, this is 17 years ago. Damn we look good. I have had the most memorable 17 years of bliss. We have two wonderful girls Courtney, 14 and Camryn, 10. We have a gourgeous house in Mesa, AZ and we both love what we do. What more could you ask for? I would ask for, 200 more years just like the 17 years of Bliss we just had.

Posted by Tim Page-Bottorff at 9:39 AM No comments: 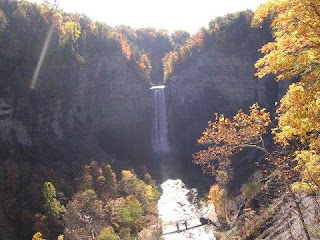 Instead of complaining about traveling, I decided to post a positive note this time. I traveled to Ithaca, New York on Monday to deliver a couple of overview sessions for Safestart. The company was Borg Warner who manufacturers several components for engines, transmissions and many other items for cars and trucks.
Between sessions, the host (Training Manager) Steve Waight drove me out beyond the finger lakes into an area that had many gorges and waterfalls. When I typically think of New York I automatically get a vision of Times Square or Taxis bustling around town. Well, that image is now changed forever. The waterfall in the picture is the tallest waterfall east of the Mississippi river. It is called Taughonnock falls and the area was incredible. If you wanted to say something about the majestic areas of the United States, you would think The Rockies, or the Grand Canyon. This area was truly majestic and belongs in the same sentence as the aforementioned.
I have ended my week for the last training class for Terra Industries. They manufacture Anhydrous Ammonia. There location is in Woodward, Oklahoma and is near the pan handle. When I left Phoenix on Monday it was already 92 degrees at 6am. When I got to Ithaca it was 56 degrees, and when I arrived in Oklahoma it was 74 degrees. What a relief from the desert heat. Whats more, is I played a game of golf on Thursday, but it started pouring and there were lightning strikes within less than a couple of hundred feet. So, the golf game was suspended. But the company was incredible! Justin, Scott and Mr. Ellis, all employees from Terra, were awesome. So within the last couple of weeks, I have played golf in Aliso Viejo, Anna, Ohio, and now Woodward, Oklahoma. What a treat. It makes the whole traveling in an airplane worth it. More importantly, I get to meet nice people like Steve, Scott, Eric G., Brian, Justin and ole' Smokey.
Just as Ithaca is "Gorges" so are the people I get to meet each and every time I go to work. If it weren't for the people, this job would be meaningless.
Posted by Tim Page-Bottorff at 6:55 AM No comments:

The Next to Last Nail

I cannot believe my Thursday this week. Well the first 1/3 of the day was great. I performed observation and feedback training to TAM International in Houston. Students were awesome and the southern hospitality was incredible.

On the way into Houston, we were flying about 1 to 2 hours ahead of Tropical Storm Edourd. We landed and there were no problems. Unless you want to consider 40 minutes to get your checked bag a problem...

After Thursday's class I had a 4 hour break between the class and flying home. Regrettably, I had a bit of anxiety getting home. Never-the-less, it does not excuse US Airways' behavior on this evening.

The incoming flight arrived in Houston an hour late. This was the typical, oh no big deal, it happens all the time simple "it's okay" error. As we were lining up to get onto the airplane, the gate agent (who worked really hard, it's just that he had that logo on his shirt that said US Airways) was told by the pilot that there was a tray table that would not lock in the upright position. So we had to wait for maintenance. There was another problem with the aircraft, a seat was stained from a previous passenger so they would not let anyone sit in it. I would say that would be about a $350 error (the cost of a one way flight from Houston) Literally, it was already 9:40 when we started loading. Now we are sitting on the airplane and the engines won't start, so now we have to wait for an air cart, to manually start the airplane engines.

Finally in the air. 8pm Phoenix time. 9:45pm we start to circle over the border of Arizona and New Mexico. We circled in the air for about 45 minutes. There was a storm on the ground in Phoenix that forced the closure of Sky Harbor airport. UGGGGHHHHHGHHGHHG.

We run out of fuel, and we have to divert to Tucson. Oh, well. Wait, there are all of the other airplanes that were supposed to land in Phoenix here on the ground in Tucson. 17 aircraft waiting for fuel. We ended up being 12th in line. I was an optimist and said, "at least we weren't last." But o contrair mo'frare. We were on the ground for 2.5 hours in Tucson. We received fuel 12th in line just like we were supposed to. But! Wait! Our engines wouldn't start. Well they wouldn't start in Houston.....why would they start in Tucson? So we had to wait for an air cart again. Last plane on the ground, and wouldn't you know it a passenger looses their cool. She just HAD to get off the plane. So they let her off. There is another story here for another time, but my gosh, we were ready to leave, and she spazes out now????

So what do I do? Is US Airways at fault here? DO I call them up and complain?

Comment me back and let me know what my next steps are. I am sure this is the last time I keep my composure. This is the Next to Last Nail that will keep the coffin shut.
Posted by Tim Page-Bottorff at 1:25 PM 1 comment: